Stuttgart – The 34th STUTTGART GERMAN MASTERS will today, Sunday, draw to a close with the Longines FEI World CupTM Jumping for the Grand Prix of Stuttgart with MERCEDES-BENZ, WALTER solar and BW-Bank. 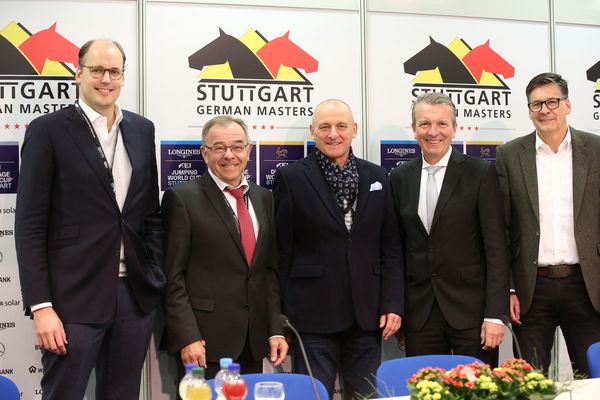 “In our mind, it was an outstanding horse show. There have only been a few that have been better in the long history of the show. It was of the very highest class thanks above all to the long-standing partnership with our sponsors. Organisationally, I’d like to emphasise that went extremely smoothly with our three horse show directors and new project team. Everybody’s done an excellent job,” stressed Andreas Kroll, CEO of the in.Stuttgart Veranstaltungsgesellschaft. “Since the first day on Wednesday, we’ve seen exciting equestrianism and world class performances, and our spectators have once again had their money’s worth.” Together with Sunday’s crowd, approximately 55,000 equestrian fans have watched the classes live in the Hanns-Martin-Schleyer-Halle. “Our expectations have therefore been met and it shows that the rescheduling of the dressage to Saturday evening was well received. We’re also highly satisfied with the fantastic media response.”

Isabell Werth was once again one of the outstanding protagonists at the 34th horse show. She produced not only an impressive World Cup display on Saturday evening but three others in the previous two days. In jumping, Pius Schwizer was in top form. The Swiss not only won both qualifications for the MERCEDES GERMAN MASTER but also secured the title on Friday evening. His comment: “If things are going your way, then they really do go your way.” A “driving” entertainer and an outstanding four-in-hand competitor, Ijsbrand Chardon left a lasting impression in the Schleyer-Halle when and after becoming the DB Schenker German Master and winner of the World Cup class.

A blink of the eye was all that separated the top two places in Wednesday’s Indoor Derby for the Prize of Walter solar with the honorary prize donated by pferdesafari Reutlingen. The German Ingrid Klimke gained revenge for the World Championships where she came second to Rosalind Canter (GBR).

For Manfred Hommel, Director of the Württemberg Sales Division at Mercedes, it was the last horse show press conference before retiring. “Just like Mercedes-Benz and the Cannstatter Wasen Volksfest site, the GERMAN MASTERS is an integral part of Stuttgart. We have again seen excellent equestrian sport with an international feel.”

Johannes Marten, Director of Group Communications at the Landesbank Baden-Württemberg, was also highly positive when reviewing the past five days of the horse show. “The BW-Bank Indoor Championship and its rescheduling to Thursday evening was a particular highlight for us,” said Marten. He also described the horse show’s professional organisation as being outstanding. “We have had many customers here and they were excited by what they saw. It looks good for a continuation of our partnership next year.”

For Wolfgang Walter, CEO of Walter-Konzept GmbH, the STUTTGART GERMAN MASTERS platform for us as a sponsor and exhibitor is simply ideal. The Indoor Derby on Wednesday was in his opinion the perfect start. He however hopes that, for the many visitors from the region, the class will end slightly earlier, and not as late as midnight.”

The 35th STUTTGART GERMAN MASTERS will take place in the coming year from 13 to 17 November 2019.