Stuttgart – For the third time after 2007 and 2016, the Dutchman Ijsbrand Chardon today won the DB SCHENKER GERMAN MASTER title at the 34th International STUTTGART GERMAN MASTERS Horse Show in the Hanns-Martin-Schleyer-Halle. 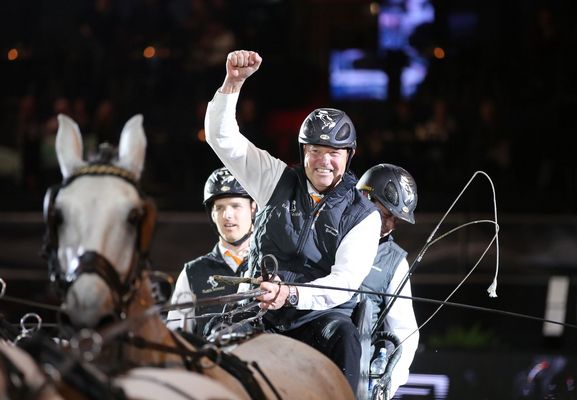 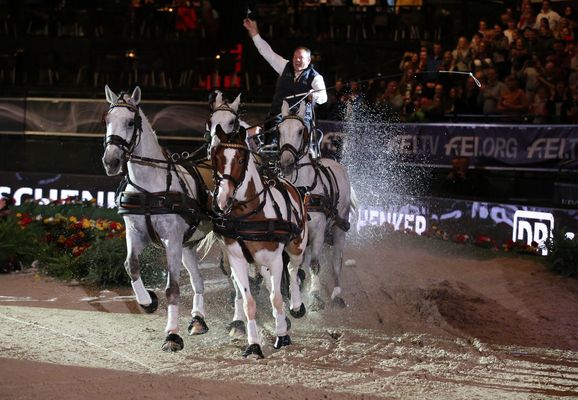 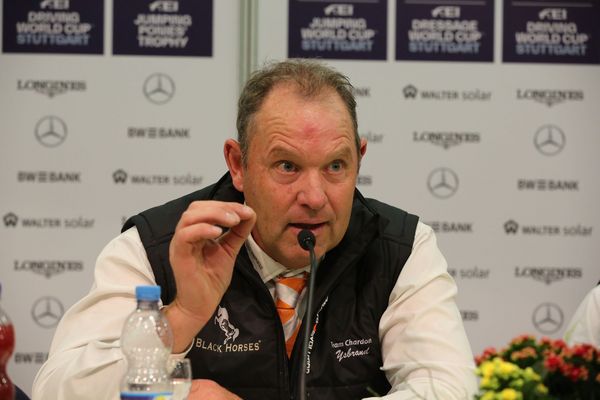 After a preliminary round and drive-off containing the top three drivers, the 11-time world champion overcame the Belgian Glenn Geerts (154.74) and the Hungarian József Dobrovitz (158.96) with a total time of 150.95 seconds. The spectacle in front of 8,000 enthralled spectators was the second qualifying event for the FEI Driving World CupTM series. Round 1 took place two weeks ago in Lyon. Together with the points won in France, Chardon now heads the standings for the final in Bordeaux in February.

“I swapped my horses for Lyon and didn’t drive too well there. Things initially went very well here yesterday. I was far too quick in the second round and made three mistakes. I’m absolutely amazed as I’ve never experienced three drivers only being separated by a single second after two rounds. The standard is extremely high,” said the winner when summing up. The youngest of the day’s six contestants, the 29-year old Belgian Glenn Geerts, also appeared to be highly satisfied: “Everything went very well for me. I only made one mistake in the four rounds. It gives me a lot of confidence going into the next stages. I can make into the top three.” Third-placed József Dobrovitz from Hungary was also visibly proud: “All the teams in the top five places drove with horses I’ve trained. I’m really proud of them.” He went on to add, “I like the Stuttgart horse show and the course suits me nicely.”

Ijsbrand Chardon was also full of praise: “I think we’ve got the world’s best course builder in Wolfgang Asendorf.” The German then summed up his “recipe for success” by saying, “I think long and hard about how I want to design a course. Course building is not something I can do at the click of the fingers.”

The only German in the top-class field was Georg von Stein. After finishing third in the Schleyer-Halle in each of the past two years, he this time placed sixth. The 46-year old was competing in Stuttgart with a slightly changed team of horses as he has swapped the left side around.

FEI representative Mark Wentein (Belgium) underlined just how close everything is at the top: “One mistake decides your placing – between first and third were only four seconds respectively.” And then added, “Stuttgart is organisationally significantly better than Tryon.” As everybody knows, it was the venue for the World Equestrian Games in September…