Stuttgart – What a return for the 36th International STUTTGART GERMAN MASTERS Horse Show after a two-year break due to the corona pandemic. For Andreas Kroll, CEO of the in.Stuttgart Veranstaltungsgesellschaft, the past days of the horse show in the Hanns-Martin-Schleyer-Halle was a “top class comeback”. “It was something we hoped for, and our expectations have not just been fulfilled but surpassed. The atmosphere and the public were once again magnificent. It was an important signal that we had the courage to go ahead with the horse show after a three-year break.” 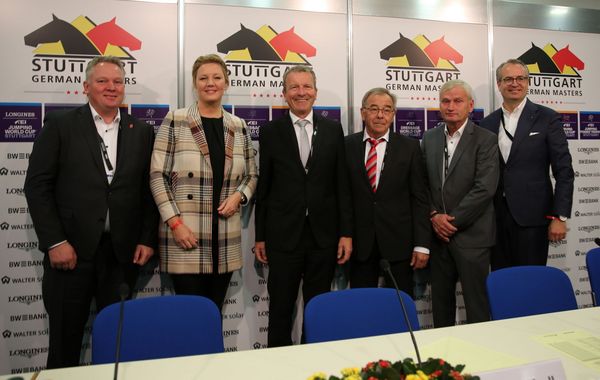 Speaking at the Closing Press Conference before the highlight today on Sunday (13 November), the Longines FEI World CupTM Jumping for the Grand Prix of Stuttgart with BW-BANK und WALTER solar, both the organisers and the sponsors were delighted with the way everything had gone. Andreas Kroll: “It’s been a wonderful horse show and we’re highly satisfied. We were sold out on Saturday evening, and we’ve reached our target of 50,000 spectators. We’ve done everything right by returning this year and we’ve made many equestrian fans very happy. I’d like to single out the whole organising team that has pulled off a perfect restart after the three-year break. I’d like to say a big thank-you to all the stakeholders, our competition partners, the FEI and the many volunteers in front of and behind the scenes.”

As for the plans for a new indoor arena, Andreas Kroll said, “We’re currently working on a feasibility study. The horse show will continue to take place in the Schleyer-Halle for the next three years, meaning building work will start in 2026 at the earliest. We’re also holding talks for an alternative arena as our aim is to keep the horse show in Stuttgart and the region.

Right from the first day, the visitors were able to watch top class equestrian action at the 36th STUTTGART GERMAN MASTERS. After eventing champion Michael Jung made history in the Prize of WALTER solar when winning his ninth Indoor Derby, Richard Vogel from nearby Mannheim won his first title in the BW-Bank Indoor Championship for riders from the Federal State of Baden-Württemberg. The 19-year-old youngster Moritz Treffinger claimed the win in the iWEST Dressage Cup. Philipp Weishaupt’s victory in the GERMAN MASTER show jumping classic on Friday was accompanied by an unforgettable atmosphere. Each and every seat was taken in the Hanns-Martin-Schleyer-Halle on Saturday for Boyd Exell’s victory in the four-in-hand World Cup and Ingrid Klimke’s triumph in the dressage freestyle. One equestrian highlight followed the other over the course of the five days of the horse show.

Angela Brötel, the Director of Group Communication and Marketing at the Landesbank Baden-Württemberg, was also thrilled by what she had seen at the STUTTGART GERMAN MASTERS: “We’ve experienced numerous goose bump moments. As a long-time partner, it’s very pleasing for us to see so many happy faces.” CEO Wolfgang Walter from WALTER solar also spoke of a “fantastic event with excellent starting line-ups and high standards everywhere”. He also felt the Energy Forum in which more than 80 guests were present was a big success. “Clean sport and clean energy are very important aspects for us,” said Walter.

As for the three horse show directors, the 36th STUTTGART GERMAN MASTERS was also a big success. Carsten Rotermund explained, “After a long break, we naturally just didn’t know what was going to happen. Now we’re so pleased about the successful comeback. Numerous competitors like Isabell Werth and Boyd Exell praised the exceptional atmosphere and the great riding conditions.” The top performances on display were, in Andreas Krieg’s mind, basically down to the crowd: “The riders and the drivers were borne by the spectators, something that doesn’t happen that often in the world.”

The 37th International STUTTGART GERMAN MASTERS Horse Show will take place in the coming year from 15 to 19 November 2023.