Stuttgart – 6,400 spectators turned up on Wednesday afternoon for the start of the 31st International STUTTGART GERMAN MASTERS Horse Show in the Hanns-Martin-Schleyer-Halle – and they were immediately treated to exciting and attractive rides in the dressage class and two jumping competitions for riders from the region. 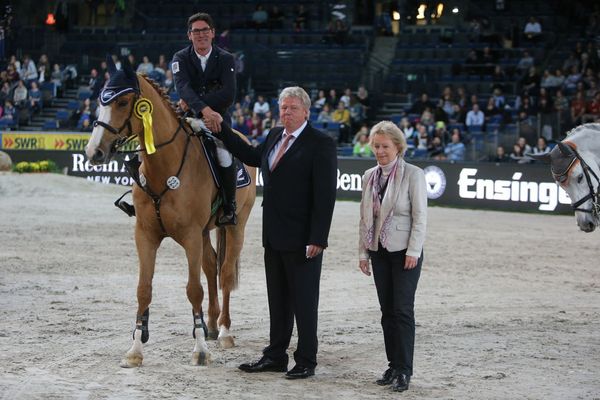 After the four qualifying classes during the course of the summer, the leader of the overall classification Markus Kölz lived up to his status as the favourite coming into the final of the BW-Bank Indoor Championship by winning the Prize of the Firma Schmidt Sporthandschuhe GmbH. In the saddle on Etiche de Fribois, an 11-year old gelding, the 2013 BW-Bank champion’s clear round in 60.11 seconds relegated five-time champion Timo Beck on the ten-year old stallion Habicht CR (0/61.71) into second place.

Victory in the ten-strong all-women line-up in the Inter-I-Dressage for the Prize of the Firma iWEST went to Lena Gundlage on the 13-year old Westphalian gelding Campino (70.868 points). Second was Susann Konrad atop Siena, a nine-year old Oldenburg mare (70.684).

The NÜRNBERGER Burg Cup for juniors from the state of Baden Württemberg, an M Class style jumping competition, was won by Niels Carstensen on the nine-year old mare Bugatti in a four-rider jump-off in a time of 28.44 seconds. Just 33 hundredth behind was Sebastian Ertz who also posted a clear round (28.77).