Stuttgart – For four-in-hand driver Rainer Duen, who made his Hanns-Martin-Schleyer-Halle debut this week, the 31st STUTTGART GERMAN MASTERS was “bombastic and the audience tremendous”. As far as Andreas Kroll, the in.Stuttgart CEO is concerned, it confirms, “we’re doing a lot right at our Stuttgart horse show.” 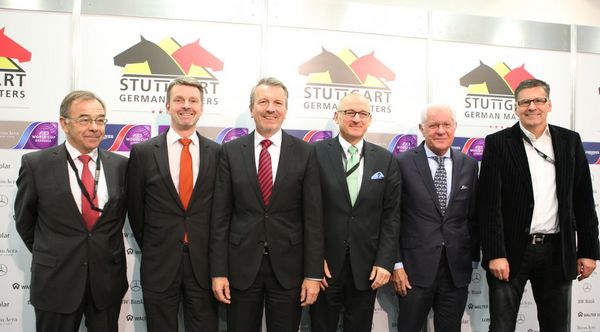 Speaking at the Closing Press Conference before the highlight on Sunday afternoon, the Longines FEI World CupTM Jumping Grand Prix of Stuttgart – presented by MERCEDES-BENZ, WALTER solar and the BW-Bank – the organisers and main sponsors expressed their extreme satisfaction with the way everything had gone. A 55,000 attendance means that the set target has been met. Highly pleasing for Andreas Kroll is that, “Seventy-three per cent of the available tickets were sold and the changes and improvements to the schedule have gone down well with the spectators. We’ve once again enjoyed equestrianism of the highest class.”

There was the emotional goose-bumps atmosphere that included Frenchman Sidney Dufresne’s win, the impressive Baden-Württemberg day on Thursday and Christian Ahlmann’s brilliant ride to win the Mercedes German Masters on Friday. Saturday served up world class equestrian sport with the FEI World Cup classes in driving featuring the outstanding Boyd Exell and in dressage featuring the ladies Beatriz Ferrer-Salat, Isabell Werth and Jessica von Bredow-Werndl. ”The variety with three World Cups is a stand-out feature of our horse show and forms the foundation for our success. What’s really important is that we have dependable partners and sponsors at our side with whom we can continue to develop the horse show,” stressed Andreas Kroll.

“My thanks go out to the whole team both in front of and behind the scenes, all the riders and our equestrian fans that, after the terrorist attacks in Paris, created a fantastic atmosphere in the arena and have reacted very positively to the additional security measures and checks at the entrances.”

The sponsors were all thrilled by the STUTTGART GERMAN MASTERS. Manfred Hommel, CEO of the Mercedes-Benz dealership in Stuttgart, praised the highly professional organisation and the quality of the horse show that has grown in stature once again this year.” For the company, the horse show just down the road from its headquarters is of great importance. Speaking at the closing press conference, he confirmed, “We will continue to be a part of the show and have signed a new contract.”

Ralf Ingelfinger, the LBBW head of public relations, highlighted the long connection with the event: “We’re proud of having been involved with the horse show right from the very beginning. In this day and age it’s something special.” Important above all is that the customers embrace the horse show. “The STUTTGART GERMAN MASTERS is of great importance for our bank and we’ll continue to remain on board as a partner in the future too.”

For Wolfgang Walter, CEO of WALTER konzept, the horse show, “has for the past five years provided a good platform that we, as a medium-sized company, also like to use to showcase our products.” The new schedule on the final Sunday with just one session was seen as being positive by everybody present. Wolfgang Walter assured that he and his company would continue their engagement in the horse show next year too. “We still have to discuss in which way, shape or form.”

Horse Show Director Gotthilf Riexinger was equally delighted with the five high class and work-intensive days. He summed up by saying, “The sport was outstanding in every discipline. There were lots of words of praise from the riders for the knowledgeable spectators in the arena. Stuttgart is treasured and discussed all over the world.”