Stuttgart – She could hardly believe her luck. On her face was the biggest smile you could imagine – but not only on her face as her grandmother, who had travelled down especially from northern Germany, had a smile of equal dimensions. The 21-year old Lena Gundlage, the reigning U-21 champion of Bavaria, had just won Thursday’s final of the iWEST Dressage Cup at the 31st International STUTTGART GERMAN MASTERS Horse Show. 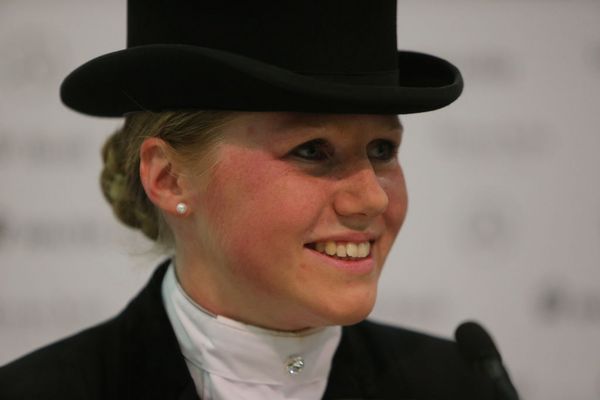 “I rode for the very first time in the Schleyer-Halle yesterday but I’ve walked around the place before,” she said. The judges awarded her performance on Campino – a 13-year old Westphalian gelding – 74.100 points. “It’s a tough score to beat,” praised Tournament Director Gotthilf Riexinger, himself an international dressage judge. Gundlage, who moved to Bavaria when a young girl, finished almost three points ahead of second-placed Sandy Kühnle, who came to Stuttgart as the leader of the overall classification after the four qualifying classes in Ludwigsburg, Heroldsberg, Aulendorf and Göppingen.

“I’m totally happy. The crowd gave me a great feeling by applauding when I entered the arena,” said Lena Gundlage when speaking at post competition press conference. “When I arrived here in Stuttgart, I felt a little lost with my little transporter alongside the big trucks,” she freely admitted, “and the stablehands took the mickey a little.”

Gerhard Meyer, owner and CEO of the series sponsor iWEST, congratulated the winner and announced his company would continue its sponsorship next year. According to Meyer, the 2016 series will contain the same events but, “we will be looking to see what improvements we can make.”