Stuttgart –Isabell Werth has already notched up her second win at the 33rd International STUTTGART GERMAN MASTERS Horse Show in the Hanns-Martin-Schleyer-Halle. After claiming the Grand Prix on Friday, she also won Saturday’s Grand Prix for the Prize of Stihl, the qualifying class for the Grand Prix Special on Sunday morning. The international jury awarded her performance on the Hanoverian gelding Don Johnson FRH 75.560 percent points – it handed her the victory and a purse of 3,000 euro. 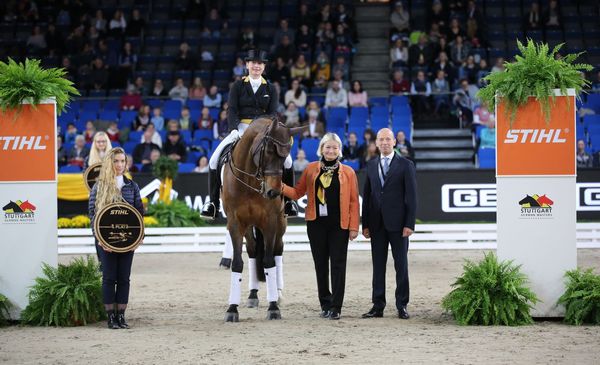 “Today I had to cater for the fact that he was a little bit ticklish and I had to be tactically clever when riding him,” said the multiple Olympic, world and European champion. Second place went to fellow German Fabienne Lütkemeier in the saddle on the 17-year old Hanoverian gelding D’Agostino FRH (74.680) followed by Bernadette Brune (Germany) and the 13-year old Oldenburg bred stallion Spirit of the age OLD (72.200).