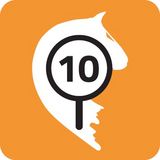 Using the free “Spectator Judging” app, spectators at the Stuttgart German Masters will be actively involved in the dressage classes for the first time. After every performance, spectators can unofficially score horse and rider. The spectator scores will be announced as an average for each rider. It generates an exciting dynamism that captivates the audience to an even greater extent and makes them watch more intensively.

Spectator entertainment is the main aim of the app.

The resulting score is not intended to compete with the judges’ score due to the different perspective and assessment.

The spectator in the arena coming closest on average to the respective final score of the judges has the chance of winning a prize – the score has to be submitted before the officials results are made public.

The app was recently used at the CDI 4* Perl in Germany and was highly popular amongst spectators, judges, organisers and riders. Organisers and spectators alike appreciate the fact that the audience is involved to a far greater degree. Judges praise the similar spectator scores and the increased understanding the app produces. Riders like to find out what the audience think and feel they are treated even more fairly as a result of the additional scoring.

In this way, dressage should become an even fairer and even more thrilling, transparent and enthralling event.